The DP World Tour arrives in Vilamoura for the 16th consecutive year and, has been the case for several years, it is host to more than just the eventual champion.

As in Mallorca last weekend, the pressure is mounting on those around 117th on the DP World rankings, with only those on and above that number certain to keep their playing privileges. And it can be awfully tight.

Take Darius Van Driel, at the cut before the Mallorca Golf Open. Sitting pretty with 18 holes to go, a five-over 76 saw him drop just one place, but enough to lose the one hand he had on his ‘card’ and meaning he is under the gun to perform this week.

On the other side, Jazz Janewattananond’s 17th hole birdie may well have been the difference between going into this week at 116, a rise of 11 places in a space of days.

Even those safe from Q-school have their nerves tested, with only the top-60 having the chance to play the Nedbank Challenge next week, and the final 50 going on to the lucrative DP World Tour Championship starting on the 17th November.

For some, they will be thankful that the Dom Pedro track isn’t too taxing a task, the open nature of the resort course lending itself to an average winning score over the past five years of around 20-under.

They will have to putt well, but aggressive play will give a host of chances on a course that can call on the defence of the wind and little else.

Looking at past winners, names such as Padraig Harrington, Tom Lewis (twice), George Coetzee, Lucas Bjerregaard, Shane Lowry and even Alvaro Quiros point heavily to those with form in Qatar, Dubai, Sicily, Morocco and Dunhill Links. Point them out, let them go, and see who rolls the rock the best.

Twins are the theme of the DP World Tour this year.

Not only do we have the two Danes, now winners of five tournaments between them at this level, but now Yannik Paul becomes the first of the German duo to win on any of the major tours, in doing so beating Nicolai and Rasmus by six and eight shots, respectively.

Despite going the wrong way on Sunday, Rasmus, alongside fellow withdrawal Thomas Pieters, has done enough to be at the finale, leaving his brother to prove the best bet of the week and launch himself up from a current 67th.

Whilst Nic’s second victory, at Ras Al Khaimah, came after a pair of missed-cuts, his dominating maiden win in Italy came after a T21 at links track Hillside, and 17th at the very relevant Czech Masters, when he lay in the top-10 going into payday.

Spookily (it is Halloween after all), current form is 37th at Valderrama – a course that should not suit at all but could be said to be linksy tricky at a push – followed by last weekend’s 16th, when he was again on the front page of the leaderboard going into payday.

Top-10 off-the-tee last week sits nicely with a putting average in the top-five, a perfect combination for a challenge that seems very similar to that which faced him at the Marco Simone Club, where he led off the tee and in tee-to-green, as he did when winning in the UAE from Jordan Smith in 24-under.

The 21-year-old was fourth in last season’s finale and will rightly want to join his brother in the select field.

Critics will point out his lack of prowess on the back-nine last week, but he was one of a bizarrely large number of players that struggled coming home. I prefer to look at his initial 63 holes, and overall suitability for the test ahead.

When runner-up last year Nicolai was fifth off the tee, 12th in approaches, second in tee-to-green and top-15 for putting. It all looks as if it is lining up nicely for a similar attack, and one that could be rewarded. 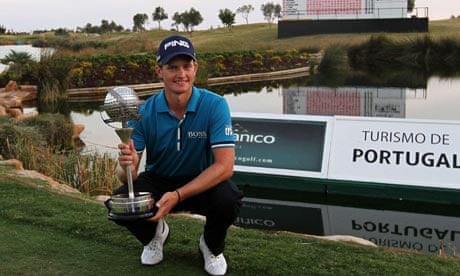 I’ll have to mention Eddie Pepperell as he is actually top of the list for the numbers formula, and I hope that he doesn’t almost nick it like last week’s listing number one -Kurt Kitayama – did!

For me, he is too occupied with making waves against the LIV tour on Twitter, so, after plenty of thought, he is just left out in favour of Tom Lewis, who calls himself after such excellent course form and some sneaky recent figures.

Portugal figures repeat an awful lot, with many regular contenders (including Pepperell) posting two, three or more top-10 finishes. Nobody is quite like 2020 winner George Coetzee, who won here on the bridle, and whose Dom Pedro record is a win, five top-10s, and a pair of top-20 finishes in just 12 starts, but the Englishman is the only player to have won twice here so probably trumps the lot, especially having won here on just his third ever start as a professional.

After looking as if he would go to the very top, the 31-year-old probably hasn’t helped himself over the last couple of years, flitting between the Korn Ferry and PGA Tours alongside his home events though it is noticeable just which tournaments he showed up in through 2019 and 2020.

Whilst he won the 2019 KFT Tour Championship by five shots, the best of the rest includes ninth at Abu Dhabi, third at Saudi, 11th at The Open, fifth at the Dunhill Links, eighth here, and a tied-13th and 6th through the same final two events as he would have faced here. In fact, sitting in 152nd on the rankings, he probably needs something of a miracle to even keep his card, but if he is going to show something, it will be here.

The Florida resident is very hard to read – note that runner-up to Justin Thomas at St. Jude 2020 – but has shown with a 13th at the shortened Czech event and top-16s in Denmark and Italy that he will compete when conditions are right.

Over the last three months, Lewis ranks top-30 for ball-striking for the tour, 16th in greens-in-regulation, and 35th for scrambling, whilst last week in Mallorca, he was top-15 in tee-to-green and led the around-the-green stats.

Often wild from the tee-box, the 2011 and 2018 champion will once again be at home at a favoured course, and if there is anyone that can show there is something behind the maxim “Horses for Courses,” it should be the former junior star.

This section of the market is tough to split.

All of Dale Whitnell, Janewattananond and Lukas Nemecz caught the eye last week, but even though the Austrian has exemption after his victory in Mallorca last year, he will be glad of launching himself up inside the top-90 after an excellent defence of his title and his best finish of the year so far.

Despite being beaten a long way at the 2016 Tshwane Open 2016, Winther’s runner-up to Charl Schwartzel reads very well given Coetzee has won that event twice, whilst top-10s in Abu, Qatar, and in the Czech Republic point to what should be suitability to this track.

Sadly, the 34-year-old hasn’t clicked at the Dom Pedro missing the cut three times in four starts, the last of those in 2019, two years before his breakthrough at this level.

There is nothing spectacular about the Austrian’s play. He is steady, accurate and putts very well, finding over four shots on the greens in Denmark, seven in France, the same at Valderrama and nearly three last week. Those last two might suggest he needs it tougher, but he shot two rounds of 62 when recording a 15-under total at Santa Ponsa last year and conditions should be fairly similar this week.

In a section of the market that finds it hard to win, Winther comes off four rounds in the 60s last week, pointing to him being close to his best, and that should be enough to land a top-10 at least.